& The Birth of the Legendary “Miss M” 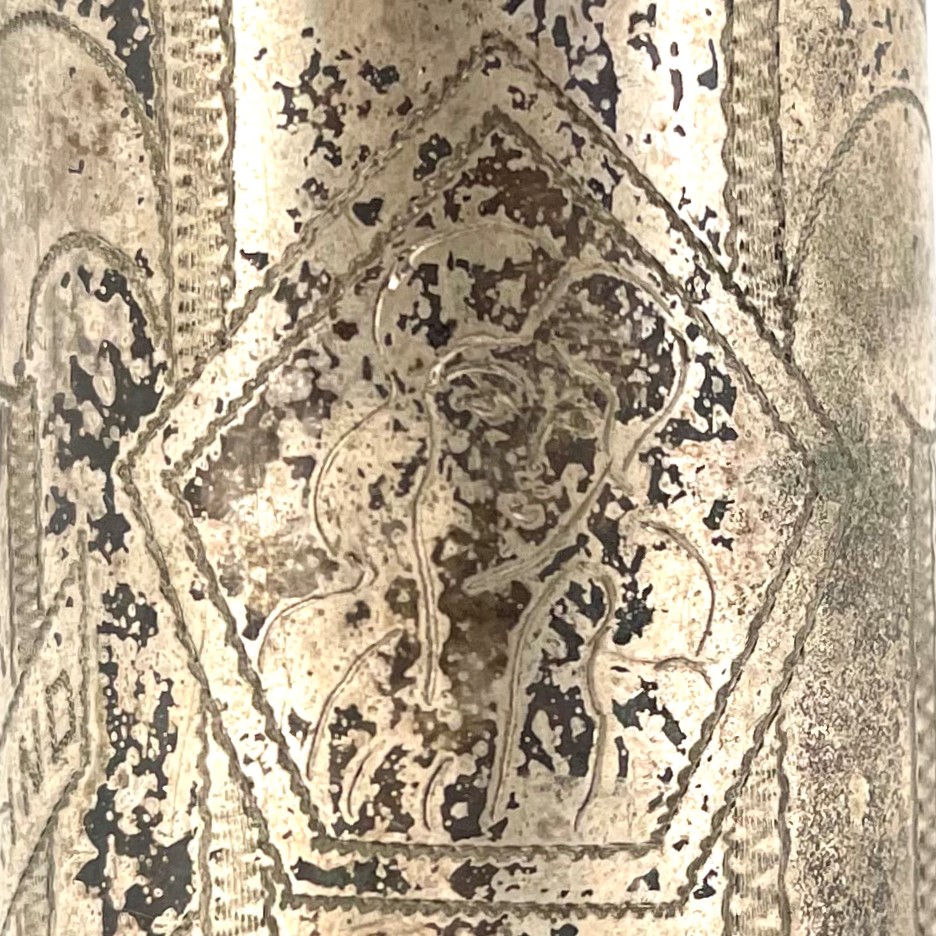 In the late 1970s a man from Tennessee was helping a friend clean out the house of a deceased relative in Oklahoma City.  The job was to clean out and prep the house for sale.  Years of possessions flooded the attic and garage, all of which were headed directly to the dump.  The relative of the deceased wanted nothing to do with any of it and told the man he could keep anything he found in the old junk that he might want.

Amid the piles of now unwanted possessions, lay an old saxophone, in a case that had disintegrated so badly it was barely holding itself together, let alone doing anything to protect the horn inside.  The man knew nothing about saxophones, but thought he might hold onto this one item, thinking someone in his family might want it one day.  Perhaps his son would learn to play, perhaps someone else he knew would have a use for it, he was not entirely sure.

But something told him to take it.

Upon arriving back home he stashed it away next to a few other oddities he had collected over the years.  The saxophone took up residency next to a Mickey Mouse comic book (written in Greek) and a piece of a Saturn V rocket booster that was discarded after the last few missions were scrubbed.

The man’s son never took up saxophone, and, having no real use for it, he contemplated more than once just tossing it in the trash.  But he never did throw it away.

The sax kept its place next to the other random yet interesting objects for forty years…. until 2020.  The man was now retired and dabbled in selling random things online.  In an effort to do a bit of cleaning out himself, he thought he would list the old saxophone for sale online, hoping it would bring $100 or so.

While working one day, a fellow saxophone collector who knows my love for silver Conns sent me a message with the link to the listing.  I was in the middle of a meeting at the time, and not really looking closely at first, I dismissed it.  “A C-Soprano…. I’ve got a NWII already, don’t need another” I said, quickly looking at the first picture and serial number.

This was the first C Soprano I had ever seen clad with Conn’s loveliest of ladies.  Another closer look at the photos…whoa…hang on…serial number 204,818?”  My brain was instantly confused (granted, not a rare occurrence). 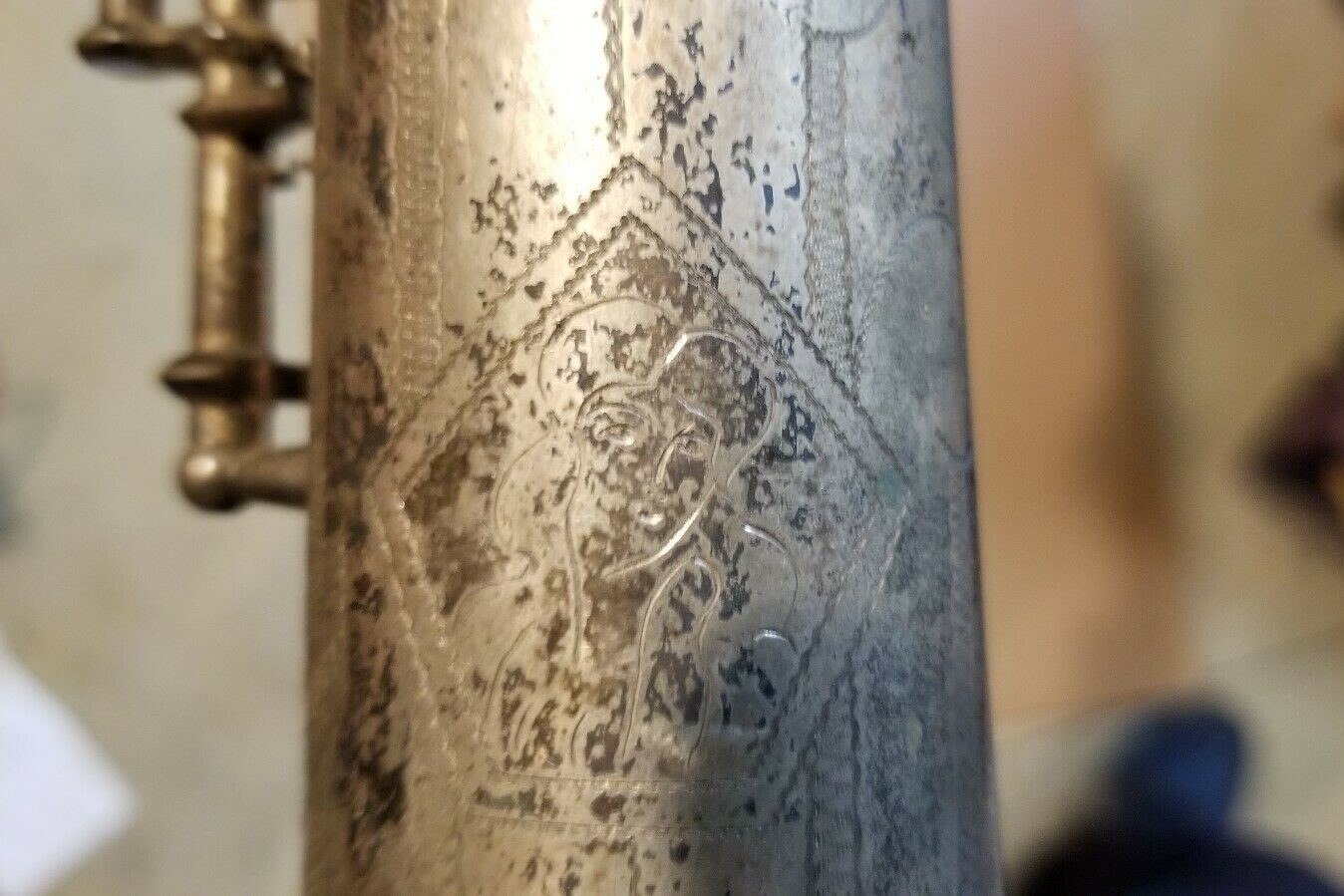 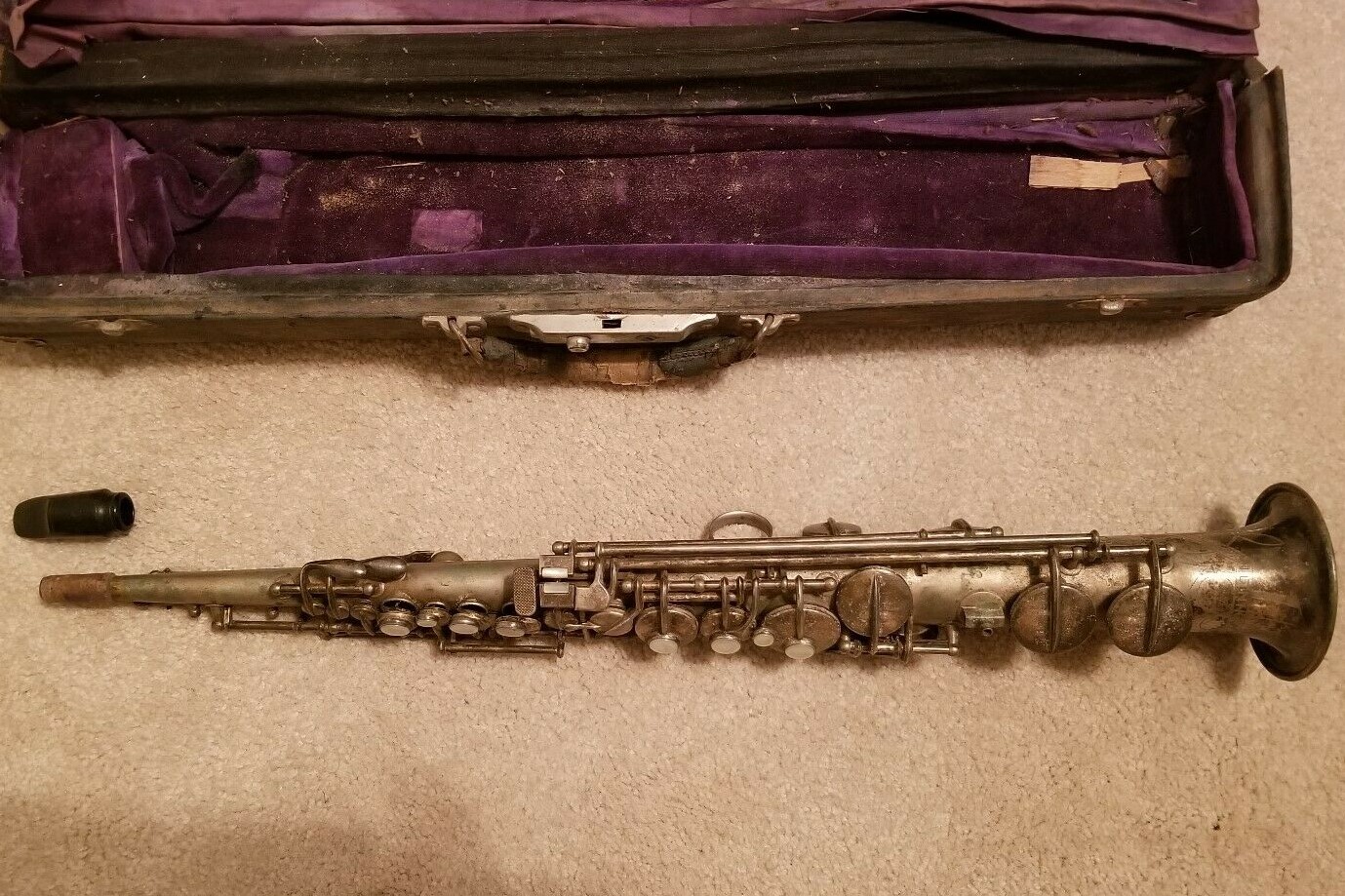 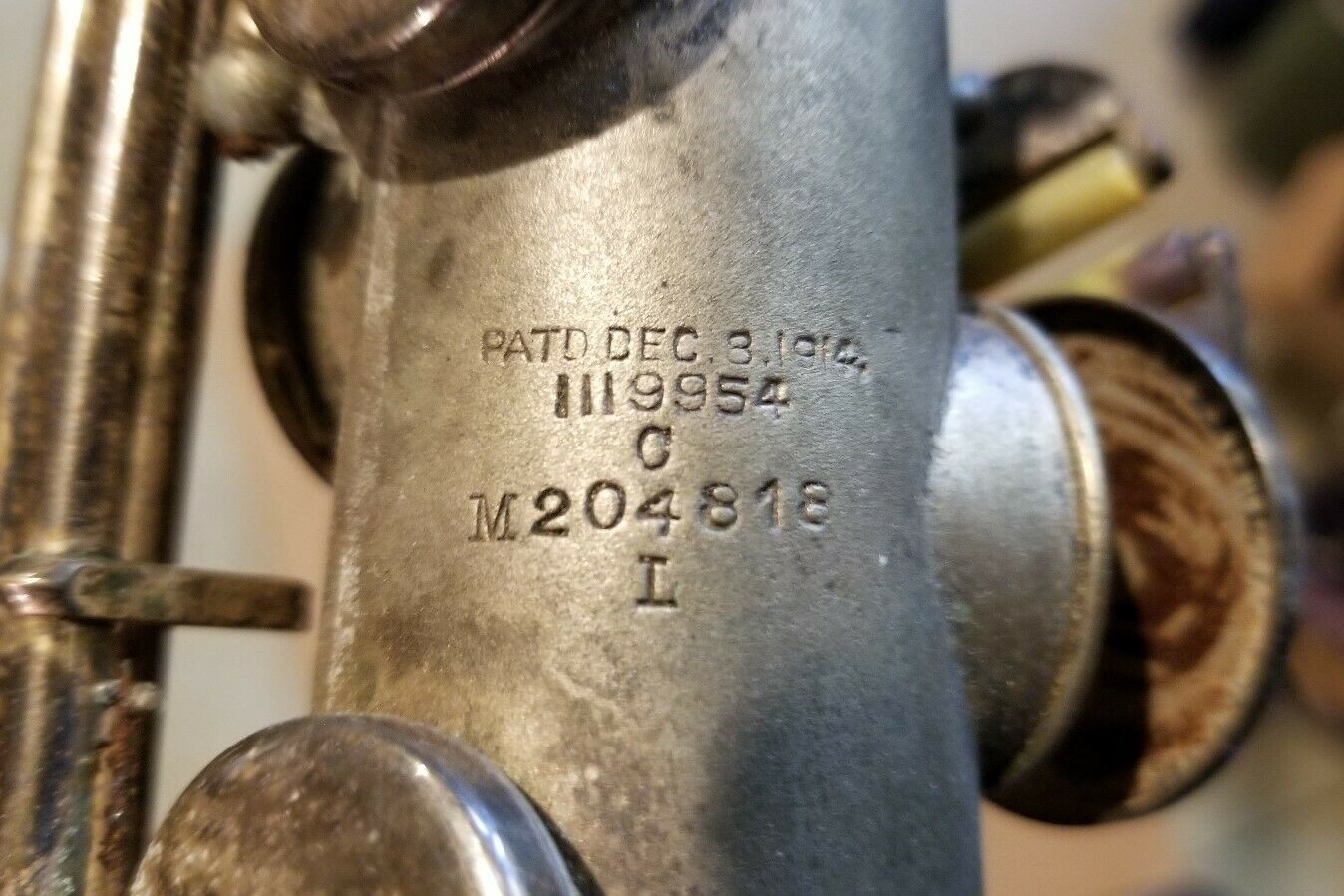 Referencing The Many Faces Of Lady M gallery, I saw that saxophone had the earliest serial number known (at least to us today) with the “iconnic” Naked Lady engraving.  Well, that makes her the first one, right?  Well, maybe…or more likely…probably…not.

The Artist Model, fully transitioned altos with Naked Lady engraving start to appear in force in the 250,000 range.  Elements of the design start to surface in the deco style designs in the 240,000 horns, particularly on the gold-plated altos.  Amid the standard deco design of the era the pentagon begins to appear, first containing a woman’s fully nude head-to-toe figure (albeit not very detailed), often referred to as a ‘goddess’.  The ‘goddess’ appears in the pentagon in the upper portion of the bell engraving, and then, also in the lower portion.

At serial number 248,609, a new design element appears in the pentagon.  Instead of the ‘goddess’ we find  a woman’s portrait, looking over her shoulder, back to us, with a ‘hint’ of breast exposed but clearly nude, in a pentagon located towards the bottom of the bell engraving.  Perhaps this was a ‘trial run’ for the upcoming Artist Model?  Perhaps the inspiration for the Naked Lady herself?  Are there other ‘test Ladies’ that were engraved? So far we have only seen one of these such engravings. 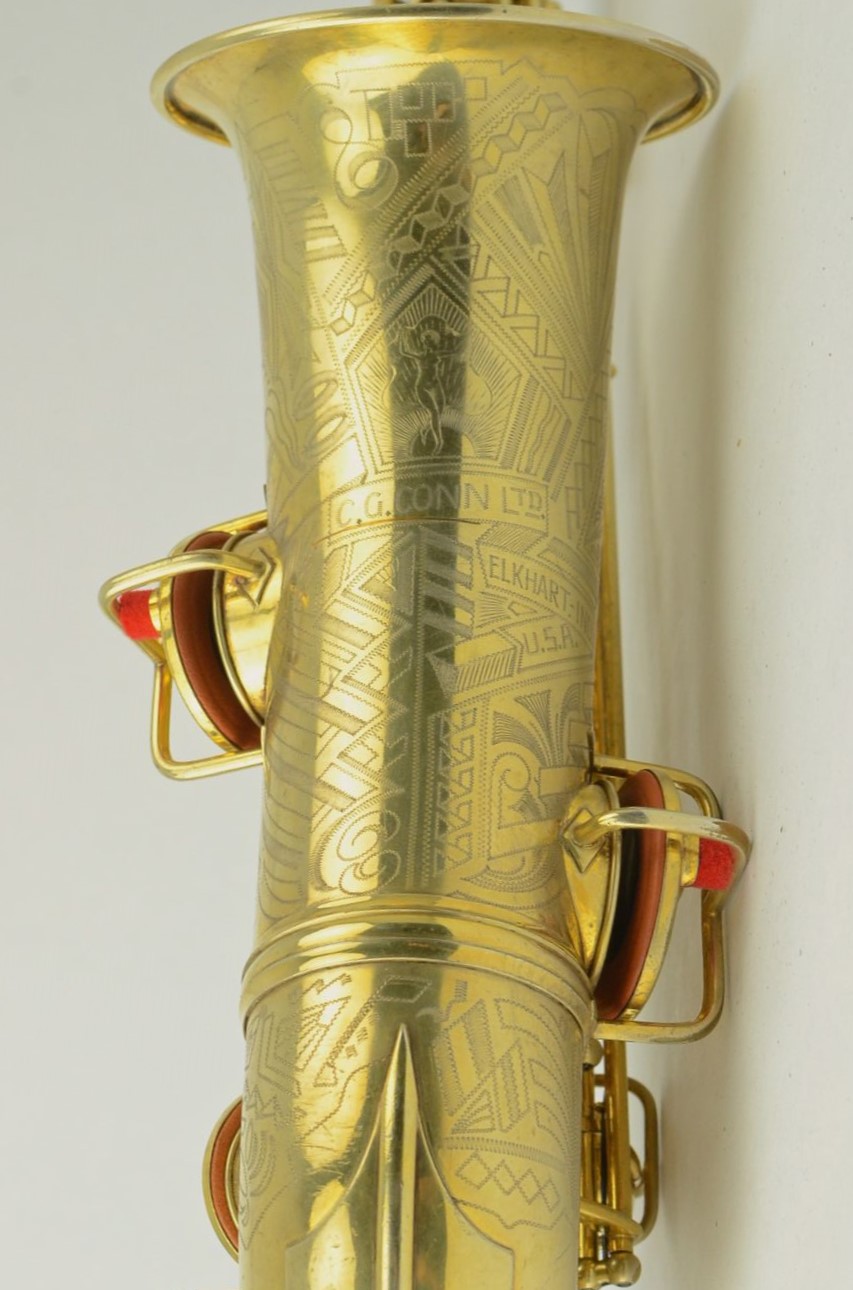 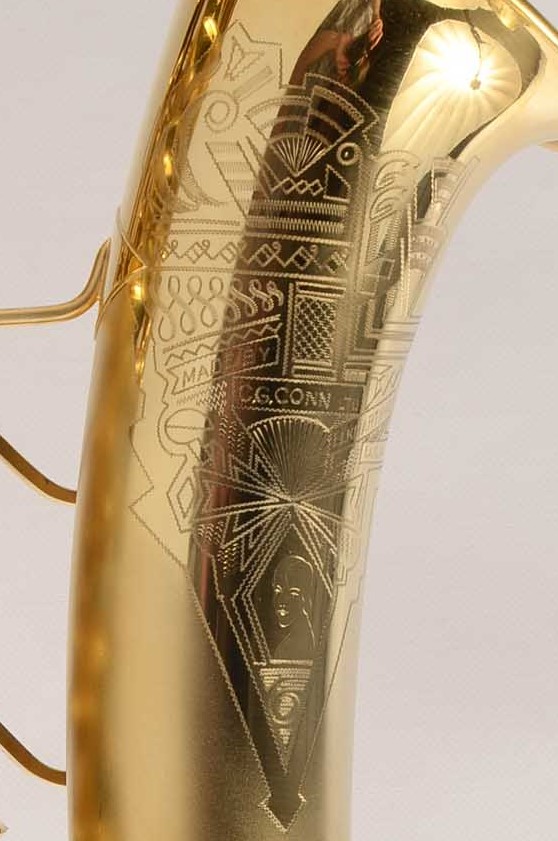 By the 250,000s the now well-known version of the Naked Lady appears, leaving behind heavily geometric Art Deco for the engraving pattern that would become synonomous with Conn for decades to come.

But what about our 204,818 serial number Naked Lady C Soprano, manufactured nearly 5 years prior?  The CONNsortia galleries have a few other saxophones with Naked Lady engraving prior to 250,127 that may help explain.

A curved soprano and two C melodies sit in the 243-244k serial number range.  Although C Melody production wound down in 1930 as well, we do see some special-order examples continue through the 279k serial number range.  But these two C melodies were most likely ‘new-old stock’ that lay un-engraved until a special order came through.  The same might have been the case for the curved soprano. 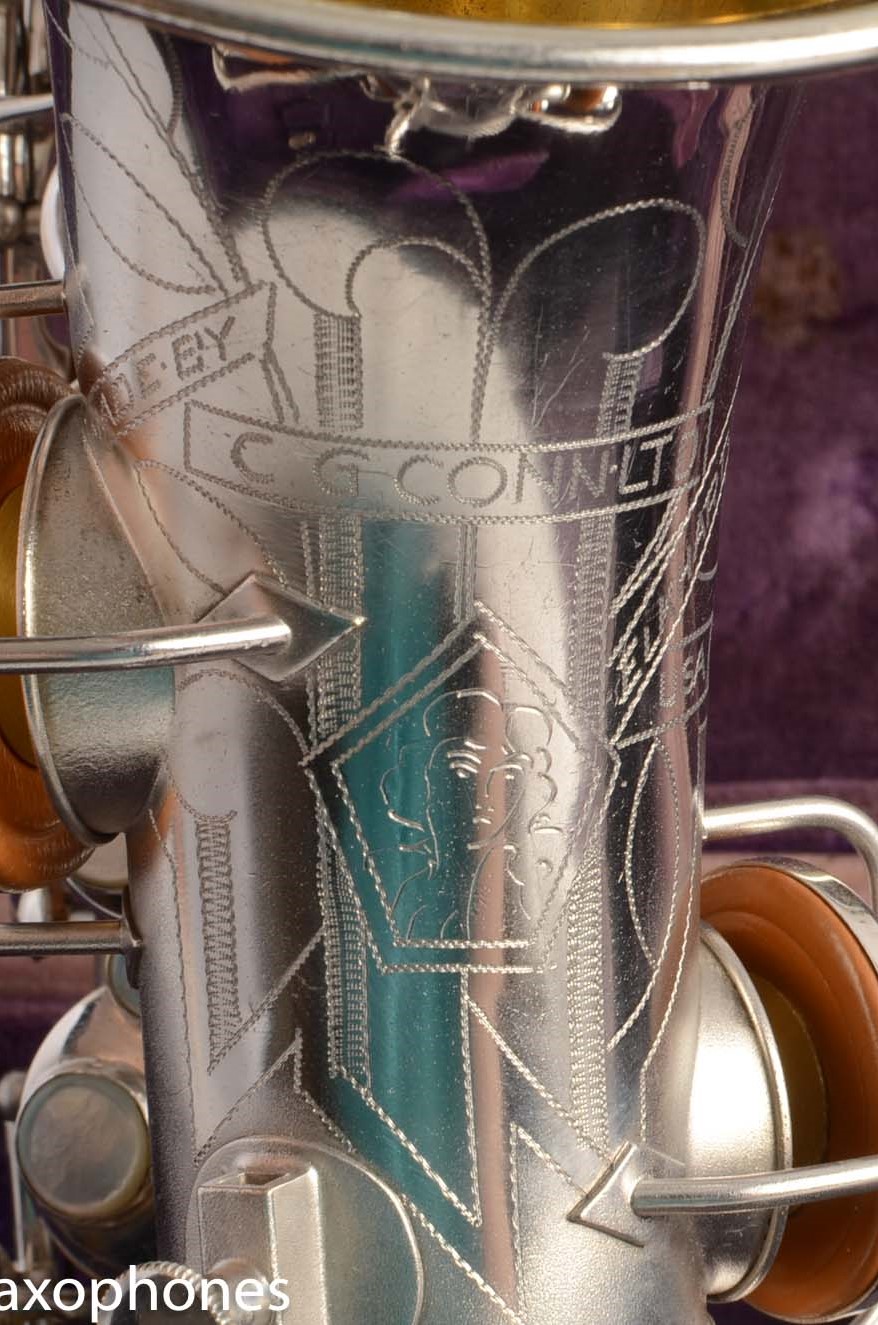 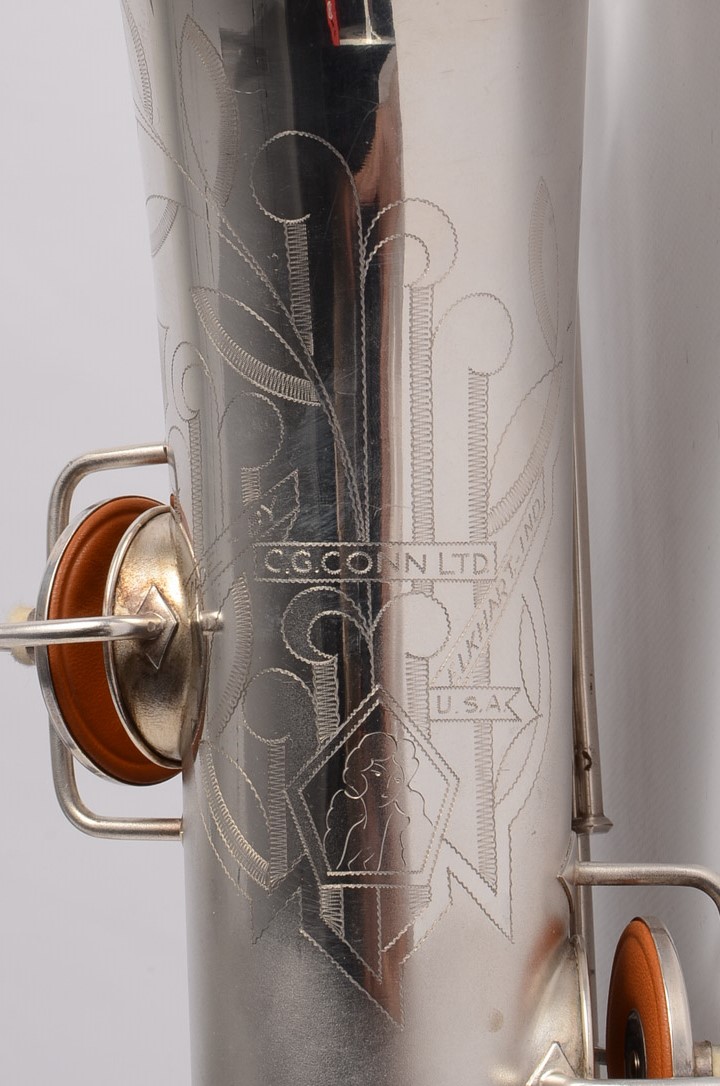 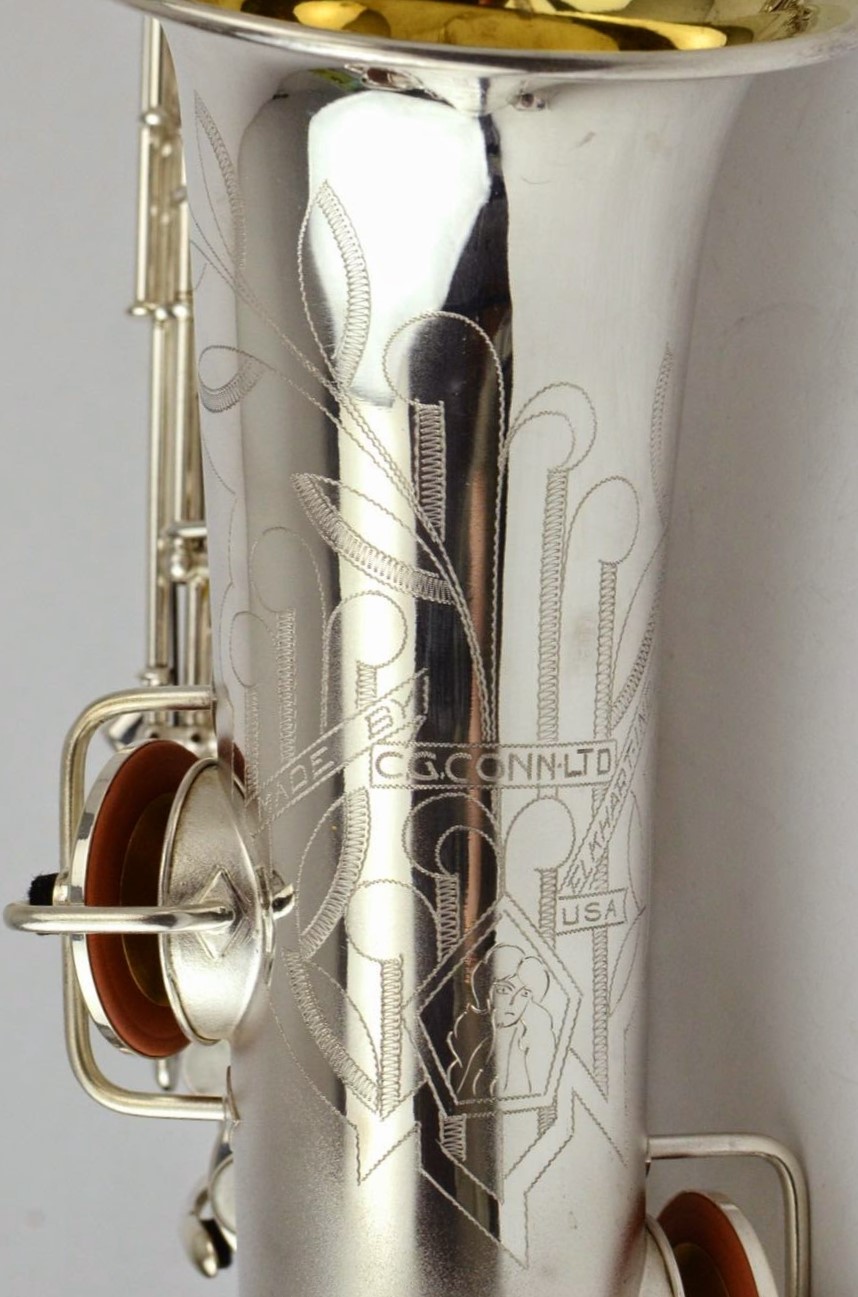 Earlier than this, we have two other serial numbers with Naked Lady engraving.  At serial number 219,316 – an brass lacquered F mezzo soprano bears this engraving.  We know for sure that F Mezzo production stopped abruptly in 1929, another casualty of the Great Depression.  Again, most likely ‘new-old stock’. 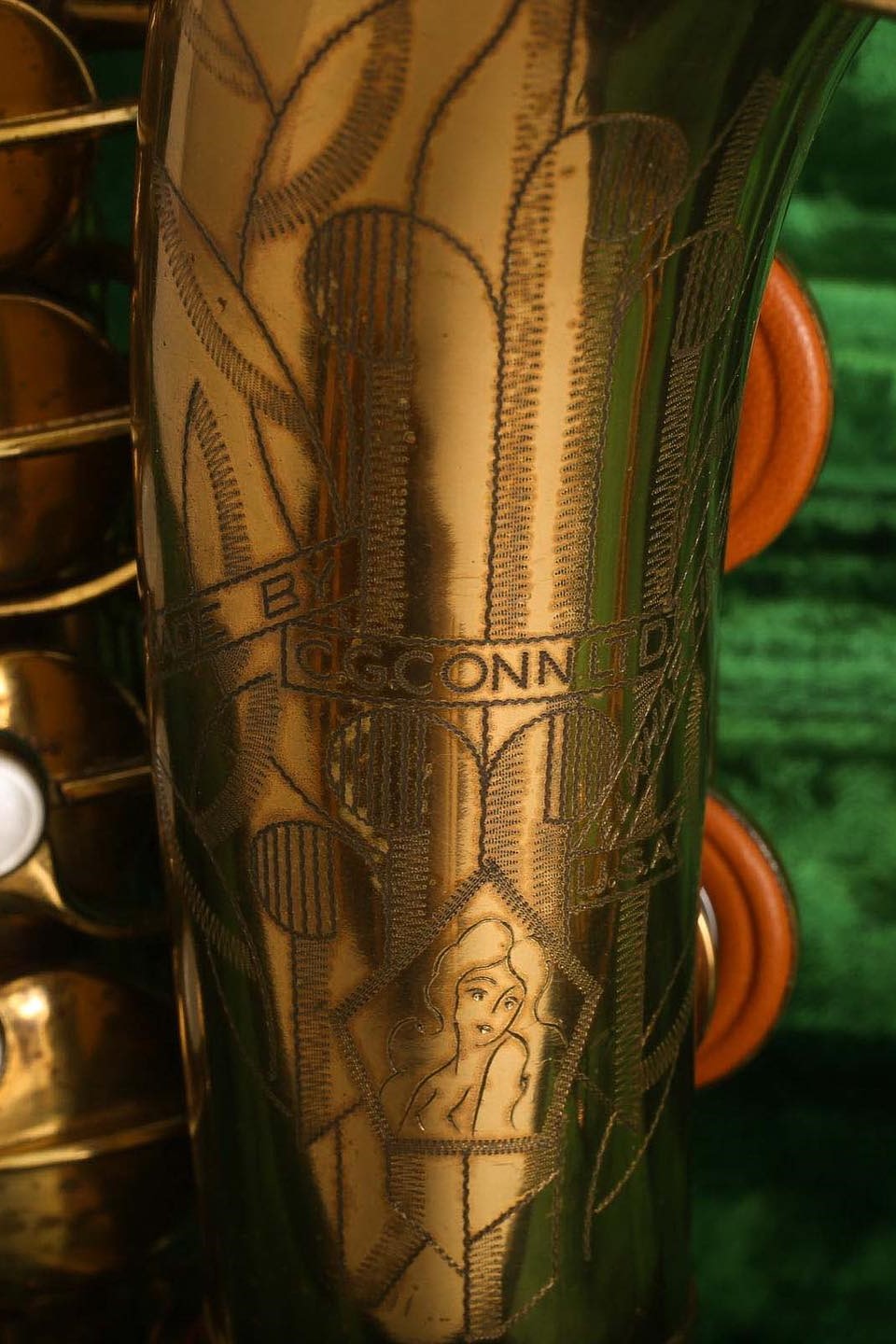 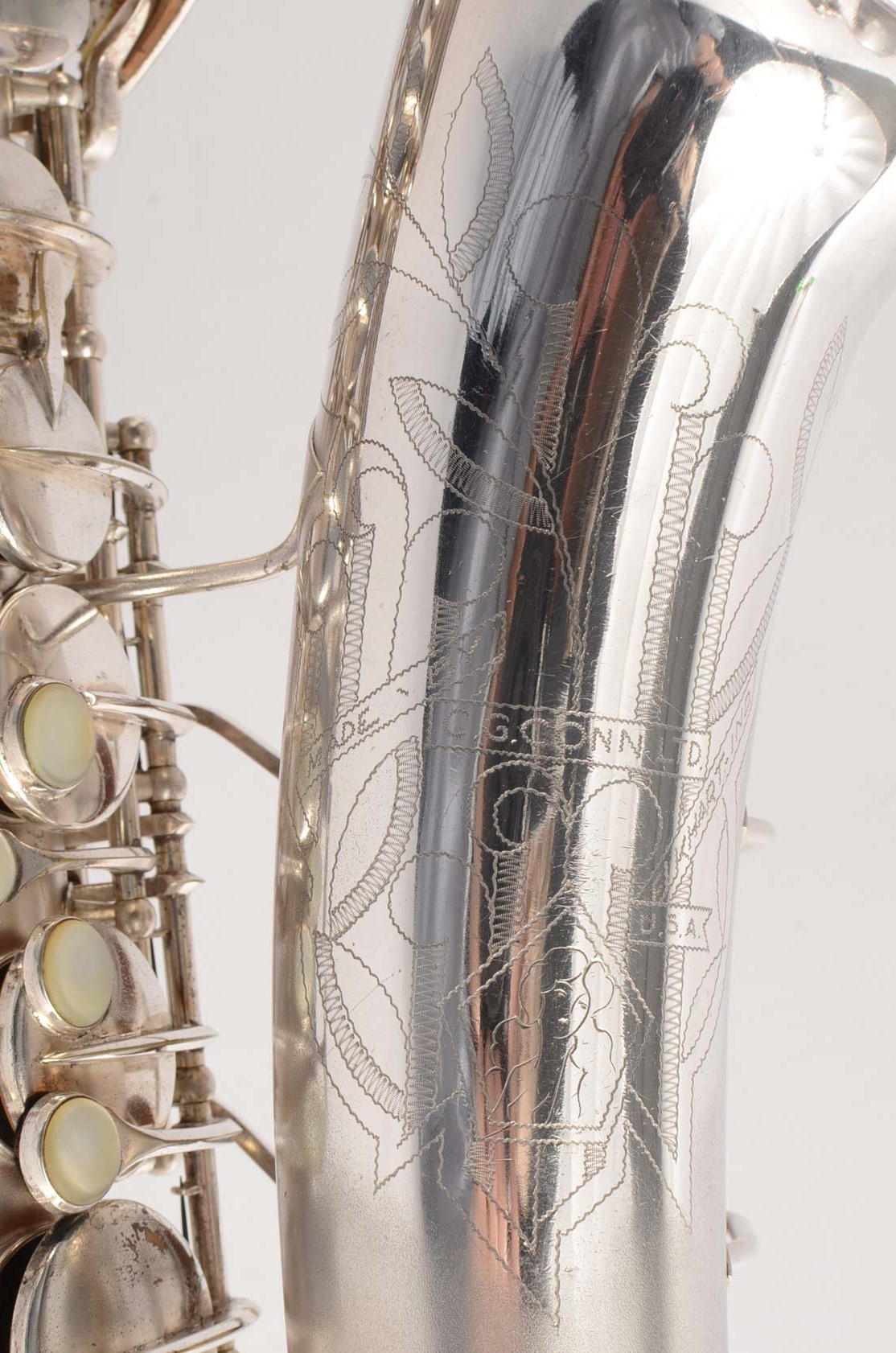 Which brings us to our newly discovered C soprano in question, at 204,818.  At least at the time of this post, she is earliest known Conn saxophone with the iconic Naked Lady engraving.  But is this the very first Naked Lady engraving? Probably not…better yet…certainly not.  So far, that title goes to 250,151 (below).  We certainly don’t know for sure that this is THE first, but to date it is.  What is also interesting to note that this alto is gold plated is adorned with much more elaborate engraving than the standard Artist Series Naked Lady.  The engraving seen here (and on other gold plated 6Ms) would later become the standard engraving on silver 26 & 30Ms. 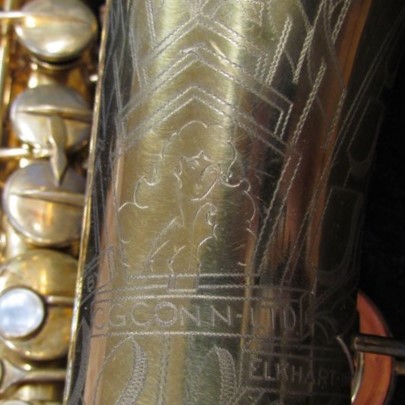 This C soprano, like the F mezzo, C melodies and curved soprano above, is likely again a case of ‘new-old stock’.  And although this saxophone isn’t the first Naked Lady engraving, it just might hold the title to another bit of Conn history.   It is arguably one of the last C soprano saxophones Conn manufactured, or maybe even THE LAST.  Prior to the discovery of this horn, the CONNsortia galleries cataloged the latest C soprano in the 176,000 serial number range.

Conn ceased C soprano production in 1929, corresponding to around the 224k serial numbers.  In a period focused on altos, tenors and baritones, very few C sopranos were produced at all.  So, at least for now, this horn holds the title of the last C soprano manufactured on record at CONNsortia

The horn is highly corroded however it is complete & missing no parts.  All the rods still move and most of the pad cups still house at least portions of original Conn Reso pads (most of which are now just a metal ring, the rivet, and some very quickly disintegrating pad bits barely holding the two metal pieces in place).  It has its original mouthpiece and case, however, the case would turn to a pile of dust in a strong wind.

We don’t know about this saxophone’s journey from Elkhart to Oklahoma City prior to its saving by the man who decided it was worth saving from the looming dump run.  Like many other saxophones and their unique stories, we may never know its history, but can most certainly lay out its future.

CONNsortia.com has one single purpose; to catalog and preserve the legendary engraving art on Conn saxophones.  Sometimes a saxophone comes along that needs more than cataloging.  This is one of those horns.   She will be fully restored in painstaking detail by Matt Stohrer.  If you have watched Matt’s YouTube Channel (perhaps obsessively like I have), you know his approach to repair and restoration of vintage saxophones is thoughtful, purposeful and with all the care and detail imaginable.

When complete, the C soprano will take its place next to another of  Matt’s restored Conn horns that is in my collection, the #243,720 C melody pictured above and shown in one of Matt’s”Repairman’s Overview” videos, below.

After another (not quite as long) journey, the saxophone has been fully restored by Matt.  All original parts (with the exception of one pearl roller) were functional.  The sax came out great!

She now takes her place in the “Connsortia Collectionn” next to several other silver ‘ladies’.

Have a look below at Matt’s wrap-up video of the overhaul and some history on these horns & some detailed photos of her, including a 3-D/360 interactive image.