CONN·sor·ti·a   noun, plural [koh nn-sawr-shee-uh, -tee-uh]   1. the association, partnership, or union of and for Conn saxophone lovers and obsessives 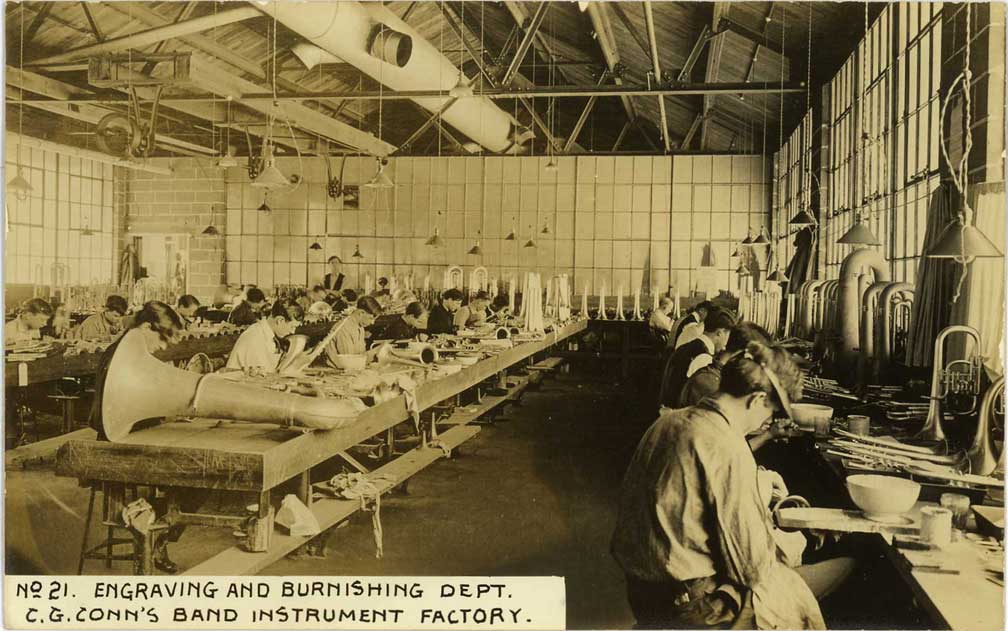 It must be done

We are not the first Conn enthusiasts, by far.  However, a simple Google search for Conn engravings quickly reveals that while some amazing galleries of Conn engraving art exist, there wasn’t a single place dedicated to collecting and preserving all the beautiful engraving work of Jake Gardner, Charles & Julius Stenberg; Jake, Lynn & Lyle Osborne and the countless, nameless others who brought the art of Conn to life.

The mission is simple.  Collect images of every single engraved saxophone Conn has ever made.

The execution is, well, a bit more involved.  We hope all the world’s Conn lovers will help us and contribute to this testament to the most varied and unique engravings the world has ever known.  A lot has been said about Conn’s continual experimentation of mechanical and tonal innovations, and now somethings grand is said about the art that went along with it.

Call it an ‘open source museum’, carefully curated and cataloged by two guys who said “it must be done”, and a CONNsortia of partners who agree. 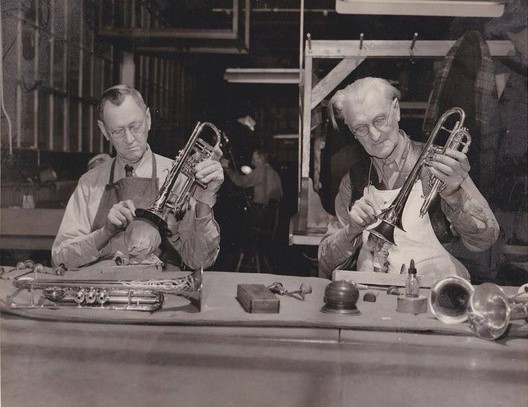 Everyone that conntributes photos and conntent is a part of the CONNsortia, however, the people below have generously added significant conntribtuions to this site, for which, we are ever grateful.  Please check out their amazing work at the links below…

Ray at The Museum of Musical Instrument Engraving momie.org

Mark Overton at The Saxquest Museum and saxophone.org

CONNsortia believes that the sharing of historical knowledge of C. G. Conn, his company, and the amazing instruments he/they produced is of the upmost importance.

We work very hard to present this information to the world, and so do our partnering Conn saxophone loving CONNsortia members.  We are happy to share our information for use, with prior permission.

Please note that some conntent on the site comes from members of the CONNsortia who have graciously allowed us to showcase their dedication and hard work, and their permission may also be necessary for reuse.  Please conntact us at connsortia@gmail.com to inquire about using conntent. 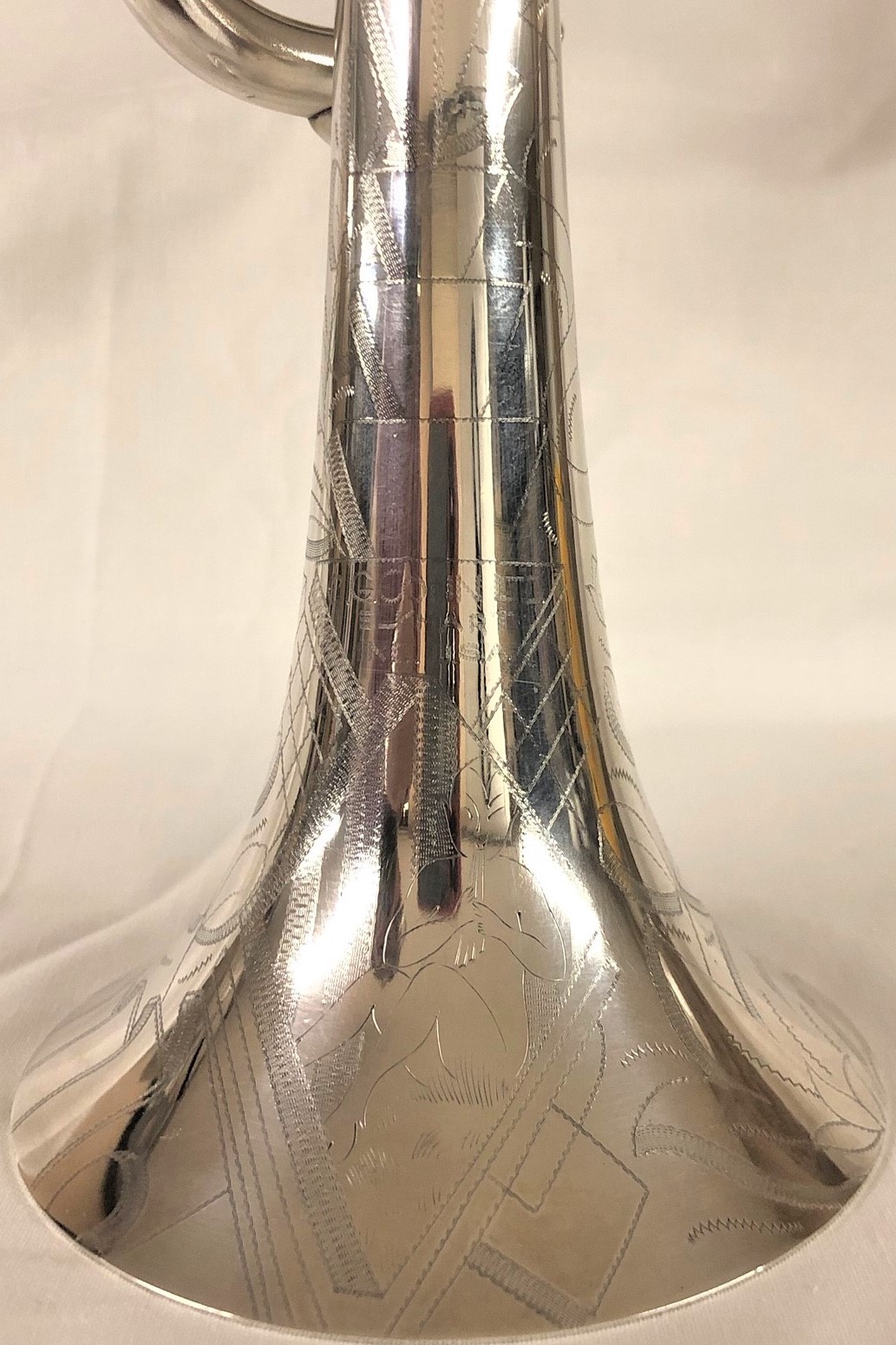 It started with a trumpet.

John is not a musician, historian, or Conn expert.

Engineer/scientist by day, he started as a trumpet player/collector, you know, during that time in your life when you stop goofing around and start wanting to actually learn something creative.  He quickly fell in love with the Conn Art Deco engraving of Pan the flute player on a silver plated 40B Vocabell trumpet he added to his collection.

Post Hurricane Katrina, he became friendly with Stafford Agee of Rebirth Brass Band, and started seeking instruments to be donated to the musical collective known as the “Birthplace of Jazz” through what is called noise4NOLA.  Any instrument, large or small, perfect or in dire need of repair (Stafford did the repairing) would and could be donated.

After some ‘thoughtful’ encouraging from his new wife, who, as it turned out,  was a fan of his but not of trumpets, he saw the error of his ways and became a sax player, eventually finding his way to the world of vintage Conn saxophones (the same place he landed in his trumpet playing).

John’s quest for silver Conn M Series horns led him inexorably to Brian at GetASax.com, who buys, sells, and collects the best saxophones he can find from all over the world. Getting to restore lots of Conns and get them singing again is part of what makes GetASax a fun business to operate. If you’re interested in selling a Conn saxophone, send Brian an email at getasax@gmail.com or check out the ‘sell us your sax’ page at GetASax..

Brian loves Conns in particular, so Brian and John got talking about all manner of things Conn. Conn instruments are fascinating because Conn was constantly innovating. They were always experimenting with different necks, different keywork improvements, and all kinds of other features that expanded the saxophone’s potential. They even made some one-handed saxophones (left and right) for vaudeville acts.

One day John asked Brian if he would share some pictures for an idea he had, to document every single engraving possible of Conn Saxophones. Brian’s response: “I’ve always wanted to do that!” So they decided to work on it together – John taking the lead with building the website, and Brian helping with photos and model/ feature information.

For the record, this is not and should not be a two person project.  This is a global saxophone community effort.  One where everyone that adds to Connsortia becomes a part of Connsortia. We are just the guys geeky enough about Conn Saxophones to think that we can orchestrate it.  So enjoy the galleries, there are many more coming over time, with lots of other special features and exhibits planned.  And if you feel the urge, please become a part of Connsortia by going to the Submit Photos/Contact Us page and send in photos of your horns (yes plural, we know you have more than one)!